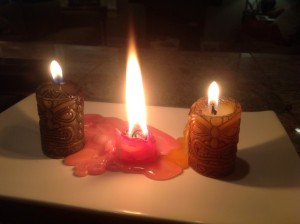 Not the Disney-inspired Candles

Some poor misguided person has come out with what they call Disney-inspired scented candles in flavors such as Dole Whip, Haunted Mansion and Main Street Bakery.  Talk about trademark infringement!  And candles are such a liability lawsuit magnet — fire, insurance issues, etc.  Some fool will probably burn down their house with one and then try to sue the theme park operator when they had nothing to do with it.

View the candles here on Etsy.

I’m pretty sure Disney’s and Dole’s lawyers are already in touch. Good idea; wrong approach. Expect this to be shut down faster than a Muslim protester at a Donald Trump rally.

Read a news article about it here.

UPDATE Feb 6, 2016:  Look’s like they’ve already taken off the “Disney-Inspired” and Dole Whip verbiage.  Some of the descriptions are downright obscure now.

If you'd like to be notified when a new story is posted or new products are added, please sign up for the email list. Your information won't be shared with anyone else.