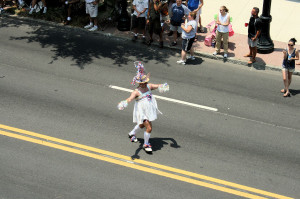 I’m becoming disturbed over the increasing use of the word “queen” by straight men.  They are actually using the word “queen” to address gay men!  Note to straight men:  this is not acceptable!  A couple of straight, in-town men were present at our Atlanta Gay Pride 2007 parade watching party, and one of them actually yelled out to a parade marcher, “You can’t throw beads worth shit, QUEEN!”  While is it perfectly acceptable for one gay man to address another in this manner, it is not acceptable straight man language.  I was also at a little cocktail party in the neighborhood a few weeks ago and heard a straight man say something about “queens” in reference to gay men.  Again, not acceptable use of the word by a straight man.  While it’s perfectly OK for me to say, “Mary, would you look at that queen prancing down Peachtree with her parasol”, it’s just offensive to hear a straight man say it.