Let me sum it up in just a few words:  Lunch good; dinner bad!

We had lunch at sensi in Bellagio right after we arrived since our room wasn’t going to be ready for several hours.  The place looks fantastic with all interior finishes being organic (stone, wood, bamboo, water, glass).  I say water because some of the half-walls are small infinity-type pools with the water flowing over dark rippled stone, if that makes sense at all. 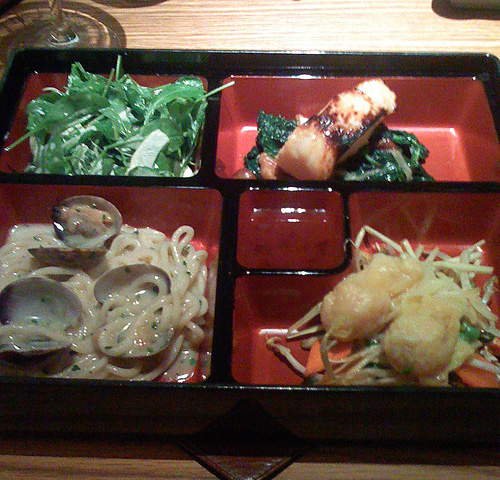 The menu at sensi was an unusal combination of Asian, Italian, Indian and American food.  I ordered the bento box lunch special which included four sample-size items from the four corners of the kitchen.  By the way, the kitchen is a glass enclosed space in the center of the restaurant where diners can observe the chefs at work.  My bento box lunch contained a watercress (?) salad with a creamy cucumber dressing, pasta in an Alfredo sauce with small cherrystone clams, sea bass with a teriyaki glaze over sauteed spinach and mushrooms, and pot stickers (pork?).  All items in my bento box lunch were absolutely delicious!  The fish was cooked perfectly (not overdone) and the flavors of the four items were suprisingly well married.

Lee ordered the pasta Bolognese and he liked it.

This morning, Lee said it was my responsibility to choose a place for dinner since he had arranged everything on previous evenings.  After tossing out a few ideas, I decided we should try sensi again since we liked it so much at lunch the previous day.

Big mistake.  It was as if some evil alter-ego chef had totally redesigned the menu for dinner.  Lee immediately was put off after we sat down because he didn’t like anything on the menu.  We had already ordered drinks and they were on the table.  I asked him if he wanted to leave and find dinner elsewhere and he said no.  So, we decided to tough it out at sensi.  Lee decided to have the crispy organic chicken with some sort of fava bean puree.  I chose the crisp shrimp appetizer and the braised beef short ribs.

The crisp shrimp were good:  three very large prawns which were flash fried with some sort of rice crust and served in a mayo sauce.  The short ribs were a mess:  deboned, served coated in a pool of tomato sauce with strange “chunks”, surrounded with a “moat” of mayo (was there a mayo theme?) and further surrounded by outer rings of red-wine reduction and white foam.  I am not a fan of the current food-foam phase we’re going through.  Foam generally doesn’t add anything to the taste of a dish, but it looks like pond scum.  The dish just looked like a big coagulated mess and it was just passable in taste.

Lee gave me a sample of his chicken.  It was OK, but had kind of a strange herb combination flavor.  The fava bean puree just looked like a green mess under the chicken.

How can a restaurant be so great at lunch and be so bad at dinner?